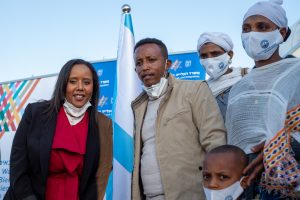 After several years of waiting in Gondar, the Abbaba family, vice-president of the FJN in Israel, finally saw their dream come true. About 300 Black Jews arrived this Friday, February 27, 2021, including the Andalaw-Tsaga family. Following Pnina Tamano-Shata’s plan which was considered by Prime Minister Benjamin Netanyahu and Deputy Prime Minister Benny Gantz, and approved following cabinet vote. She thanked the Prime Minister, the Minister of Defense and the Minister of Finance for allowing this operation. “This is great news for thousands of families who are torn between the two continents.” The minister clarified that the first to be brought to Israel will be young people whose parents are already in Israel. For Ms. Shatta, it is an operation to save lives at a time when food prices in Ethiopia are skyrocketing and famine is on the rise, ”said Penina Tamano-Shatta who 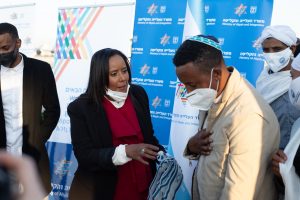 hoped that the transit camps in Addis Ababa and the Gondar region are closing their doors for good and that all aliyah applicants can move to Israel soon.All new arrivals have tested negative for COVID before leaving Ethiopia. From Friday, they will have to comply with Israel’s mandatory quarantine procedures and will be housed in specific facilities managed by the Aliyah and Integration Ministry and the Jewish Agency for Israel, in coordination with the command. from the IDF’s home front.